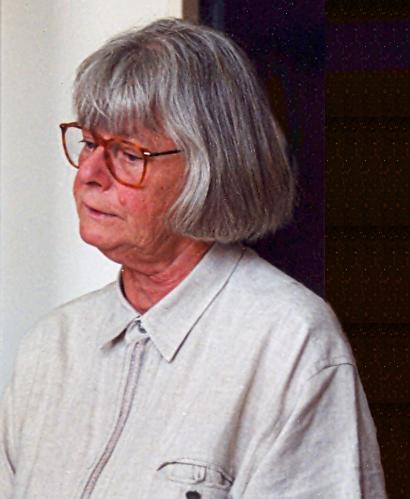 It is with great sadness that we have to announce that the archaeozoologist and veterinary historian Professor Angela von den Driesch passed away in January 2012.

Born July 11th 1934 in Dresden, Angela Felicitas Karpf and her family moved to Tegernsee (Bavaria) at the end of World War II, where she finished secondary school in 1953. Prior to studying veterinary medicine in Munich and Zürich (1957-1962), she devoted herself to the study of Romanic languages (French, Spanish). This proved very useful early in her scientific career when the Iberian Peninsula was the focus of her research. In 1963 she received the degree of Doctor medicinae veterinariae at the Ludwig-Maximilians-Universität München for her anatomical study of the inner lymphatic system of the testicle. Employed as an assistant for two years at the Anatomical Institute of the Veterinary Faculty, she continued her scientific career from October 1965 onward at the newly founded Institut für Paläoanatomie, Domestikationsforschung und Geschichte der Tiermedizin headed by the late Joachim Boessneck (1926-1991).

A major milestone in the academic career of Angela von den Driesch and for zooarchaeology in the Iberian Peninsula in general was her habilitation-thesis entitled Osteoarchäologische Untersuchungen auf der Iberischen Halbinsel (Osteoarchaeological research in the Iberian Peninsula), submitted to the Veterinary Faculty in 1970 and published in 1972. Nominated university professor in 1978, she was appointed chair of the institute in 1991 until she retired in September 1999. One major achievement of Angela von den Driesch was the Herculean task of convincing university administration not to close down the institute after her retirement. She managed turning the tide, which would not have been possible without her perseverance, together with an outstanding publication record, the numerous projects receiving funding headed by her and the scientifically important reference collection comprising c. 20,000 modern specimens from 2,700 vertebrate taxa. In September 1999 at the end of her active career, she managed another important breakthrough. The Bavarian Ministry of Culture granted the reference collection she had contributed so much to develop a State Collection status, thereby paving the way for research in osteology for many generations to come. Thus, in 2000, the institute’s collection was merged with that of the Anthropological State Collection (founded 1902) to become what is now known as the Bavarian State Collection for Anthropology and Palaeoanatomy, Munich. Needless to say that until her unexpected death, she continued working with these collections whilst analyzing archaeofaunas excavated in four continents.

With the Guide to the Measurement of Animal Bones from Archaeological Sites (1976), Angela von den Driesch set an impressive methodological standard, and zooarchaeologists worldwide will associate her name with this key publication. Other methodological contributions concern butchery marks in animals from Neolithic contexts and the diagnosis and interpretation of pathological conditions in animal bones and teeth. Her major research interest however concerned the human-animal relationship in prehistoric and historic times. The plethora of studies published by her (and until the late 1980s often co-authored by J. Boessneck) dealing with animal remains from Upper Palaeolithic to Modern Times in Central Europe, the Iberian Peninsula, Egypt, the Republic of South Africa, Southwest-Asia, Nepal, Mongolia and Bolivia illustrates this.

No doubt, the expertise in ichthyoarchaeology she acquired in the 1970s allowed her to emerge from the shadows of her mentor J. Boessneck. Moreover, whereas at that time the Munich reference collections already yielded series of important mammals and birds, a reference collection for fishes did not exist. Owing to Angela von den Driesch, this gap was filled. She visited fish markets and prepared fresh (and less fresh) specimens whenever the opportunity presented itself. Her keen interest in ichthyoarchaeology also made her a founding member of the ICAZ Fish Working Group.

The second area of expertise of Angela von den Driesch relates to the history of veterinary medicine. In close cooperation with philologists, treatises and early prints written in east Asiatic languages like Chinese, Mongol or Tibetan and dealing with the diseases and treatment of horses, birds of prey, cattle and camels were translated and evaluated from a medical-historical viewpoint. These and similar studies in European languages (Latin, Greek, Italian …) carried out at the Munich institute in the frame of dissertations proved extremely valuable for her opus magnum entitled Geschichte der Tiermedizin. 5000 Jahre Tierheilkunde (History of Veterinary Medicine. 5000 years of Animal Healing), published in 1989. Offering to the reader an overview of the history of the veterinary art and profession, the work also met the aesthetic demands of the author. Like no other person she understood how to link the linguistic-historical with the archaeozoological evidence.

Angela von den Driesch liked teaching and training young scientists. Her lectures in zooarchaeology, the history of domestic animals and the history of veterinary medicine were always very lively and likewise fascinated academic and popular scientific audiences. She loved transmitting practical skills and supervised the identification work of many doctoral students since the late 1960s. Many archaeologists and zooarchaeologists benefited from her expertise as well, which she willingly shared in so many occasions in Munich or during international workshops and conferences.

The prejudices she suffered during her veterinary education and as a young staff member made Angela von den Driesch highly sensitive to the need to work for equal opportunities for women in the academic world. She was elected the women’s representative of the Veterinary Faculty for several consecutive terms.

Those who had the privilege of accompanying her in the field know that these stays were more than just about counting bones. Field work included moments of bird watching, visits to every fish market within reach, adventurous expeditions to mountain tops and occasionally even a weekend trip to a spa if there were institutions in the vicinity where one could ask for new acquisitions for the reference collection. She loved the social gatherings in the evenings and fascinated young and old by her stories of travels and work.

Seen from the institute’s perspective she was a driving force behind the careers of all current senior staff members and we are very grateful that this stimulating, dedicated and thoughtful person has been such an important part of our lives for so many years. Personally I will particularly treasure the memory of 20 years travelling to all kinds of digs in different places, because over the years we became partners in crime. Angela was a Grande Dame and we will miss her tremendously.

Married since 1966, she lost her beloved husband Karl von den Driesch in September 2011. Angela von den Driesch is survived by her son Christian, and our thoughts, at this sad time, are with him.

Joris Peters and members of the ArchaeoBioCenter